Please join Mark Spalding on Friday, April 10, at 3pm at the indoor restaurant at the Inn at Loreto Bay, or on Saturday, April 11, at 5pm at the Community Center for the Environment (CenCoMA) at Eco-Alianza headquarters for an informative presentation and discussion regarding his ongoing research on the various mining projects throughout Baja California Sur, including Loreto.

Is mining actually good for the economy for more than the short term? Or does it do more harm to long-term sustainability of natural resources (land, water and sea) and the plants, animals and people who depend on them? What does it mean for the tourism sector?
Three major projects are currently in various stages of development: 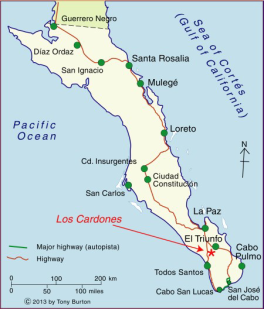 Mark is President of The Ocean Foundation in Washington, D.C., and a Senior Fellow at the Middlebury Institute of International Studies, Center for the Blue Economy. He is an environmental expert and attorney, tirelessly advocating on behalf of the world’s coasts and ocean. Mark has engaged in numerous environmental challenges in BCS, including last year’s successful challenge to the Cabo Pulmo development, and the successful prevention of a second industrial saltworks at Laguna San Ignacio. Mark also has a particular affinity for Loreto, serving as a member of Eco-Alianza’s advisory board since its founding, and having helped to establish and steer the Loreto Bay Foundation.

There are two separate opportunities to learn more about mining and associated risks in Baja California Sur with Mark Spalding, President of The Ocean Foundation. Come and increase your knowledge about environmental concerns and add your voice to the conversation.

One thought on “Mining in Baja California: Is it Worth the Risk?”