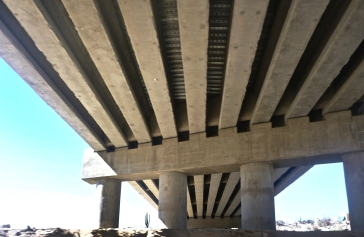 Traveling the highways of Baja are – well – different than driving stateside.  When a huge rock slide close off a section of Mex 1 – the main north/south artery that connects Tijuana with Cabo San Lucas, the locals got to work.  In the USA, next steps would be emergency vehicles, flashing red lights, and weeks of no passage.  In Baja, next steps are a couple of guys with pickup trucks and ropes who move the offending obstructions out of the way, followed by maybe a friend with a bulldozer pushing some of the dirt aside.  I.e., roads are the lifeline .. and the residents don’t wait for the government to fix things.

Mex 3 – a southern route from San Felipe along the western edge of the Sea of Cortez has long been an out-of-the-way route that that terminated at Mex 1 near Lake Chapala. Mostly rugged washboard miles with an occasional paved section that washed out during hurricanes, the road was merciless on tires, suspensions, and overall mechanics of vehicles.

During the last two decades, small fishing villages have given way to retirement homes for gringos from the states, and the road has become more popular.  Gonzaga Bay, originally a landing strip with fly-in homes, now sports an upgraded hotel and multiple restaurants.

In their continuing effort to enhance access to all parts Baja, the government has set about ambitious road development projects, and Mex 3 is one of them.  The included photographs illustrate the scope of this project, the fact that a little dirt never hurt an intrepid Baja traveler, and the vast beauty of the landscape.

Just as Mex 1 was a dream before it opened in 1972, Mex 3 will provide an alternative to the crowded western route.