Buster (the Bajanese) loves to SUP with me, and our morning paddles are a great solace for both of us.  Paddling up the coast we have been gifted with turtles, dancing rays, leaping fish, skimming pelicans, diving terns & osprey.  The light on the water some mornings, a reason to pause in honor of the stunning beauty of the Sea of Cortez nestled against the small city of Loreto.

Yesterday, Buster was in rare form.  He stood tirelessly on the ‘bow’ of my SUP board searching for anything that moved. When we both spied the small fish (already in it’s last gasp) he was unstoppable.  He lept off the board and could not be cajoled back.  Each time he reached to catch it in his mouth, the fish would swivel and turn – both spooking him and enticing him on.  But he was close. Oh so close …. 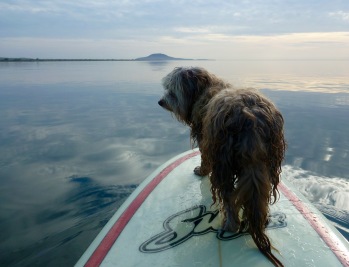 Chasing down the fish. 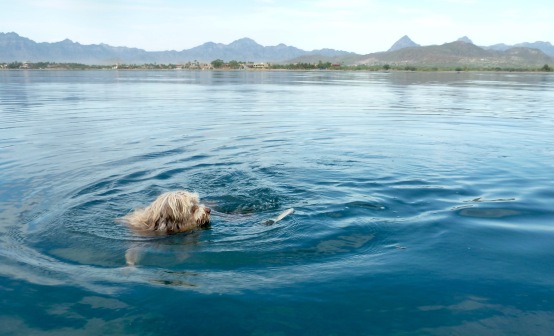 This was ‘his’ fish, and I was not to spoil the moment.  I tried paddling away.  He didn’t seem to care.  I yelled at him to get back on the board (we did have a flight to catch). Finally, I had to yank his sweet wet hairy body from the water and keep his head turned away from the fish.

Yes, we left the fish in our wake. And yes, the little hunter had his day.  And yes, we made our flight, sadly leaving Loreto – so we could once again return.

soft light
still waters
the sky the color of the sea

my paddle eases my board quietly toward the light
no real destination but exactly where i am ….

SUP. the Sea of Cortez 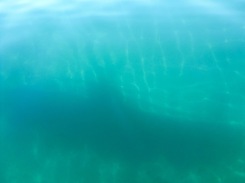 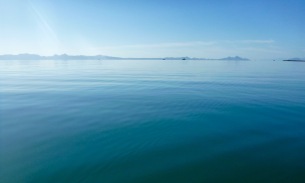 Even when I’m not in Baja, I dream of her. The starkness and beauty of her deserts. The rugged cliffs of her mountain ranges. The two faces of her seas – the Pacific Ocean and the Sea of Cortez. Blessed with a 2 hour reach of either side, I can trade surfboard for SUP board – cold fish for warm fish – crashing waves for serene waters.

Last evening, I paddled the Sea of Cortez and was rewarded with leaping fish and soaring birds. Here’s a small sampling:

The second annual swim race from Picazone to Isla Coronado took place yesterday, 13 October 2012 just north of Loreto. One hundred forty four (144) people from as far as Mexico City and Ashland, Oregon, signed up to swim. The day before the race, the winds picked up and blew through the day and into the night, and were unabated in the morning. 20/25mph constant with gusts in the plus 30 range whipped the sea into a frothy stew of whitecaps breaking on top of 5′ ground swells. Perfect conditions (NOT) for a 5.5 km swim between the peninsula and the tiny islet (oldest volcano in Baja) where currents and tides make for a difficult passage even on a glassy day.

The race co-ordinator did his best to discourage swimmers who were not in extremely great condition, trained for the race and confident in their ability to make the crossing. In spite of his warnings, 122 men, women and teens jumped into the warm turbulent sea and began the journey across.

Pangas, sports boats and kayaks offered support and encouragement and pulled swimmers who became overwhelmed by the conditions onto their boats.

I had earlier decided to SUP (stand up paddle) and registered accordingly. There were three others set to paddle – but either did not show up because of conditions or did not enter the water. Maybe smarter than me 🙂

My initial goal was the first flag. Once I managed that I thought, well, the second flag. This all the while with a backup plan of turning around and heading back to shore (as my girlfriend had requested that I do). But once I passed the second flag I was, okay .. now to the third flag. Of course, by the third marker, the seas had kicked up in the 5’/6′ range, and while standing up on my board I’d find myself in the trough of these large groundswells with no clear view of the horizon.

When the second 6 footer tossed me into the sea, I switched from SUP to SDP (sit down paddle). Even with a reduced face to the blasting wind, I was being pushed south (had to go north to make the island) faster than I could paddle. I also found it near impossible to keep the nose of the board into the wind — finally, I put my left leg into the water – an extra rudder, and while paddling with my leg created drag and slowed me down (more), at least I was heading in the right direction. Several adjustments, like pulling up leg and using foot only as a directional rudder until the wind took the nose again, allowed for forward motion. Every muscle in my body was screaming at me – and I just dug down and found more to pull from.

I encountered a young woman swimming alone. She looked up in a 360 motion – like where is everybody? I paddled toward here and paddled near her while she made her way past the rocks into the cove and onto the beach.

When I reached the sand, it was almost anti-climactic. Like – where’s the battle now? I rang the victory bell – signed in – and photographed other swimmers making their way.

Swimmers near the finish

Together : At the finish 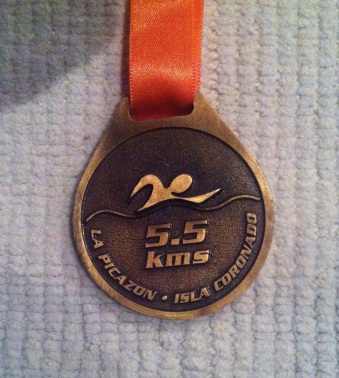 To each and everyone who completed yesterday’s difficult crossing – Congratulations! And even for those who were turned back, congratulations on your efforts!

Can’t wait for next year! 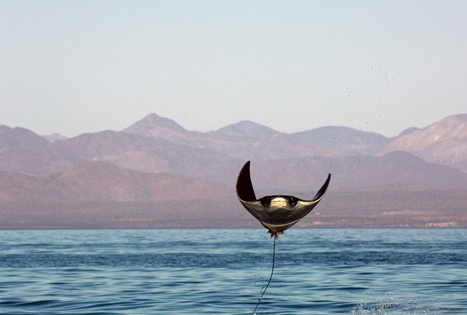 The waters around Loreto are usually pefect for SUPing – Stand Up Paddling. This morning was no exception. I took off on my fish – a 9’6″ Waterman – and headed up the coast toward Coronado Island. Winds were light and building, with lots of opportunities to refine my balance as wind driven waves crashed over the nose of the board.

Each stroke, a moment of zen.  A moving water meditation.

Baby yellowtail chased by baby dorado.
Leaping spinning manta rays.
Translucent blue flying fish chased by baby yellowtail.
Magnificent frigate birds gliding overhead.
A floating crab. What was he doing so far from shore and/or on the surface?
Clam divers dragging innertubes – with seagull hitchhikers on board.
Bluefoot and brown boobies diving and gliding in search of fish.
Vultures on-shore, finishing off discarded fish carcasses.
Children on the beach, playing in the the shallows.
Horseback riders out for an early ride.
Dogs running and chasing sticks.
Boats speeding to and from Coronado and fishing spots.

A great two hour paddle floating on turquoise/cerulean waters, surrounded by offshore islands and the ridgeline of the Sierra Gigantica.  A perfect morning ……..