Such was the beginning of John, a tropical depression born on the west coast of Mexico, who grew from to a category 4 hurricane.  Initially, John bounced along the Pacific Coast of Mexico, pouring rain into the coastal cities as he changed shape and status again and again.  The predicted storm track was toward Cabo San Lucas, then into the cooler water of the Pacific.

Instead, John took direct aim at Cabo San Lucas, and for a while, the press also took aim.  Tourists were bussed to the border.  Hotels and restaurants were evacuated.  John slid close, but instead of coming ashore, he slithered around the east end of the peninsula toward the hotter waters of the Sea of Cortez.

La Paz, the capital of Baja California, was next on the target list, and the press kept some coverage, but with no deaths or major damage, attention moved back to the war on Iraq and the rain spawned by Hurricane Ernesto on North and South Carolinas.

NOAA and others continued to project John crossing the peninsula and exiting to the Pacific.  John, however, had other ideas. 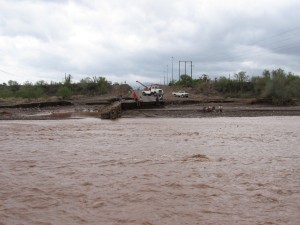 Rain and winds pelted the east coast of Baja, taking down roofs and homes in Los Barilles, flooding La Paz, and cutting electricity and phone lines.

The press went home, but John was not done.  He continued to march up the spine of the peninsula, heading toward Loreto, 217 miles north of La Paz.

Loreto’s the location of our second home and that of many good friends. Val and Barry battened down their hatches, while helping secure the front of our property.  We exchanged emails, analyzed every hurricane url available, and prayed for a turn in the storm.  Friends Lynn, Randy, Rosie and Mike raced south to arrive before the storm hit.

John edged onto land, dropping to a category one hurricane, and then a tropical storm.  Winds gusting to 65 kts whipped through Loreto, downing power lines, transformers and cutting off power, water and phones.  Flooding ripped apart streets and arroyos were impassable.

Communication stopped and worry increased. It was 36 hours after the center of the storm arrived in Loreto and the next time I heard from Val.

When she came back on-line, she reported that all were fine, but that Highway One was closed.  She sent a photograph of the normally dry Loreto River cutting through the highway.

All traffic north and south had stopped, and there were rumors that the road in St. Rosalia to the north was destroyed in many places.

Loreto, while flooded, had suffered minor damage compared to towns to the north.  John “parked” himself in the mountains behind St. Rosalia and dumped his load of rain. Slowly, reports sent via ham radio operators, began to drift in of a horrific story.

The small town of Mulege, population approximately 3100, had taken the brunt of the storm.  The generally tranquil river that flows through the center of town had risen 18’ in 6 hours.  The banks were home to date palms, playgrounds, several trailer parks, restaurants and camping spots.  As the water rose through the night, people were forced to flee their homes with only their shoes (if they had time to put them on).  One American, Peter George Clark, died, when he was swept away inside his trailer.

Roads into Mulege were closed on both sides with arroyos washed out and boulders blocking traffic.  Stunned townspeople with no place to sleep, no water to drink or wash, and no idea where to start wandered the streets.

The first photographs were via a computer powered by a generator in a house on the hill. They showed the total devastation of river level.  No CNN.  No MNBC.  Just townsfolk – trying to make sense of the enormity of the situation.

Cleanup and restoration will not stop at with the first round of emergency services.  Those wishing to help can log on to http://forums.bajanomad.com/  There are several listings within the message threads of ways to provide assistance, from local folks driving trucks, Flying Samaritans, and Rotary Clubs.  It’s a small town, off the radar screen, and even $25 can make a difference.

John ended quietly, just as he had begun, but not over the Pacific as predicted.  John headed inland toward the southwestern United States, where once again, he crossed the radar screen of the media.

Rain to drizzle.  Drizzle to sun filled skies.  The tasks of cleanup, restoration of lives, and rebuilding.