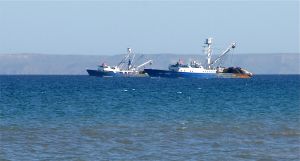 Perched on top of each vessel is a helicopter which is used to spot schools of tuna.  What chance does a tuna have against a helicopter?   Oft times, dolphin swim in the same schools, and become innocent prey in the fishing fleets nets.  While the local seas are all part of Loreto National Marine Park, and commercial fishing is prohibited, the necessary enforcement is all but non-existent.  The boat captains know all to well that there is nearly no one to stop them, and so our seas suffer.  Local fisherman complain that both quanitity and size of all local catch has diminished in the last decade.  It is these long lingers that are mostly to blame.

I scanned the hulls of the ships looking for a name.  The largest of the three is Maria Veronica.  A quick Google and I pulled up more distressing information.  A posting in 1995 about the vessel and her tactics made me furious to see her sitting with her sister ships in our waters.

Here’s what the poster said:

Tuna Meltdown :
On November 9, 1995, I was aboard the dive boat Don Jose. We were anchored on El Bajo seamount, a dive site in Mexico’s Sea of Cortez renowned for an abundance of marine life, including schools of hammerhead sharks. Small groups of divers were going out in skiffs to drift dive over the seamount. Between dives I saw pods of dolphins and noticed a small helicopter circling the area. Shortly after that the tuna ship Maria Veronica arrived.

In a matter of minutes, without any warning whatsoever, the tuna boat and its tender dropped a net directly across the bow of the Don Jose.  Within moments, the tuna net encircled the entire seamount. Inside the circle of net was one of our skiffs with four divers aboard. If these divers had been in the water, they surely would have been killed.

The Don Jose’s captain quickly cut our anchor, which had become entangled in the tuna net. As we left the area, we watched the Maria Veronica cut its net and ditch its equipment. Our captain radioed the Maria Veronica for an explanation. We were told that the spotter helicopter saw the pods of dolphins and a large dark area under the Don Jose and concluded that the seamount was a large school of tuna. Furthermore, they said that they were unaware of the seamount’s existence because it was not identified on any of their maps; they were also unaware that we were anchored and that we were diving, since no dive flag was flown. While it is true the Don Jose was not flying a dive flag, it’s difficult to believe they could not tell we were anchored and that divers were in the area, as their spotter helicopter had made several passes close to our ship and the skiffs containing divers.

The following day we returned to El Bajo. As I made drift dives over the seamount, I was sickened by what I saw — tuna net caught on most of the north mount, chains and steel cables on the main seamount. Worst of all, the entire south seamount was completely covered with tuna net. Caught in and under the net were many, many fish. The marine ecosystem had been severely traumatized and will undoubtedly suffer permanent damage.

It seems apparent that the Maria Veronica should be held accountable for its actions and responsible for removing its nets and equipment from the damaged seamount. In addition, the Mexican government needs to take stringent action to protect its natural resources and its tourists by establishing and mapping marine sanctuaries in the Sea of Cortez and initiating a mooring system at El Bajo and other popular dive sites such as Los Islotes, Las Animas, and San Diego Reef.

Baja Expeditions and another local dive operator helped organize a massive cleanup to remove the nets, cables, and debris from the seamounts. They were helped by an arriving dive group. The Mexican government reacted quickly; it fined the Maria Veronica $50,000 and agreed to a Baja Expeditions request to fund a study on creating a protected area.

An aside:  The El Bajo seamount is one of only 3 places in the world where hundreds of hammerhead sharks congregate.

Also referred to as “shoal, or bank, of the Holy Spirit” in Spanish. It is a submarine ridge that, in less than 2 kilometers, rises steeply from a 1,000-meter basin to within 18 meters of the surface.

It supports rich stocks of pelagic fishes because of an abundance of plankton that attracts consumers. The plankton (and the rest of the food web) is enriched due to the so-called “Venturi effect,” which describes how flow speed increases when a fluid is forced through a narrow area. The same volume of water carrying a given number of plankters must flow through the more constricted space between the seamount and the ocean surface, providing more drifting prey over time for predator fish lurking near the peak.