Water water everywhere. That’s Kay’s swan song, with arroyos washing out roads along the entire peninsula. She wasn’t even a strong hurricane – a category 2 in her heaviest moment – but she was grand – huge arms nearly 600 miles across. Her winds ran as high as 72mph in various locations, but her water. The rain. The desperately needed rain came all at once, the ground crusty dry. No way to absorb, but rush and run down the mountain faces and arroyos.

Multiple towns took hard hits. The Mulege river once again breached its banks, flooding everyone and thing in proximity. San Felipe, usually a dry sandy desert, found itself with streets of rivers, more suited to kayaks or canoes.

The major effect of Kay was on MEX 1 the transpeninsular highway that transits between Tijuana and Cabo San Lucas. The road cut in so many places that traffic and commerce were actually halted for three days. Today, the 13th of September, most roads have some measure of passage, and the large double tractor trailers could be seen heading south. Below, some photographs, borrowed from various posts and publications, communicate what my words lack.

Close to home, or the home I cannot yet reach, the highway between Insurgentes and San Juanico washed out first in Insurgentes, and then the bridge was obliterated over the wash a few miles outside of town.

The townspeople came together, and with shovels and arms full of rock and mud, began the process of crafting a crossing. It’s this spirit of ‘can-do’ which continues to fuel my love for Baja.

My friend Cynthia Wagstaff, who lives in San Juanico, BCS, is an amazingly creative chef. She knows exactly how to mix unusual things together that add to their individual and collective flavors. She sent me this recipe today, and with her permission, I’m sharing. One of the ingredients, Chef Jimmys Mojo Verde (he’s a great surfer and equally great friend) can be sourced on his website : www.chefjimmy.com. 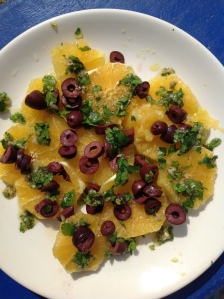 Serve on red leaf or arugula – even shredded kale.

Cynthia and Cal Wagstaff rolled into Casa de Catalina late Saturday morning.  They’d been making their way down Mex 1 through missing asphalt, torn up roads, water filled arroyos, and detours in the wake of Hurricane Paul.  The drive from Hailey, Idaho is part of their annual re-migration their beautiful casa in San Juanico.  I’d worried about their drive – and was glad to see their smiling faces on arrival.  Chica Bonita and Pancho piled out of the car behind their owners.

Cal wasn’t as convinced that they should stay – he was pretty much about ‘let’s get home,’ but Cynthia prevailed.  We swam, SUPd, laughed, we played with dogs, ate and enjoyed cocktails in the patio.  Love my friends – and all the spontaneity that seems to be what Baja is about. 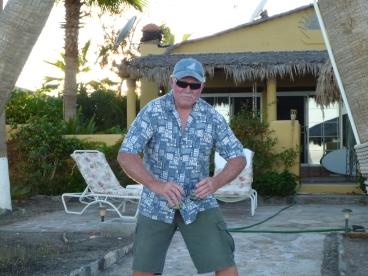 Not only can my good friend Jimmy surf, but he’s one hell of a cook – excuse me – make that chef. Notice the title with his name. For more information on his skill set, and his killer MOJO product line, click here : http://www.chefjimmy.com/ 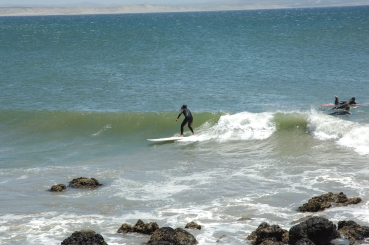 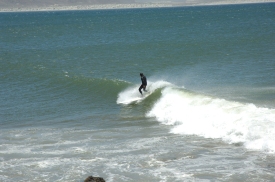 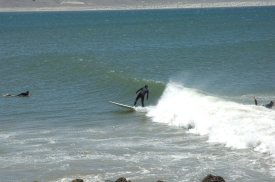 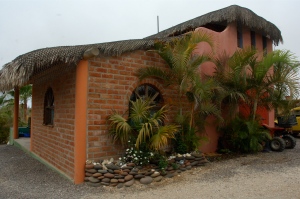 Good friends Cynthia & Cal have reason to be stateside for the summer, and are offering their wonderful San Juanico home for rent.  It’s a fabulous 2 bedroom main house with rooftop view deck and bar – perfect for entertaining.  There is a separate casita with private bath and lovely gardens.  Lucky the person who gets to spend time there.  For more details :  http://www.scorpionbayrentals.com/Site/Rentals/Pages/Casa_Baja_Luna.html#grid 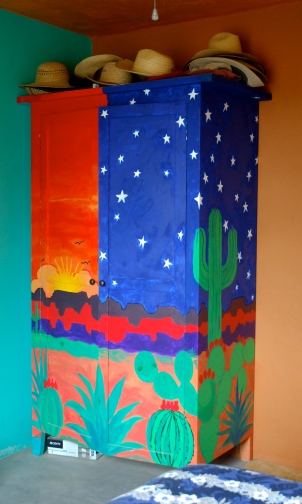 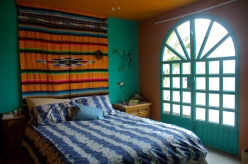 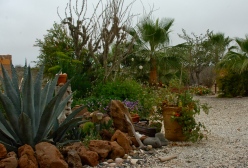 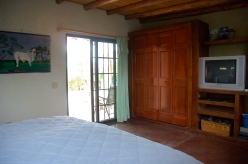 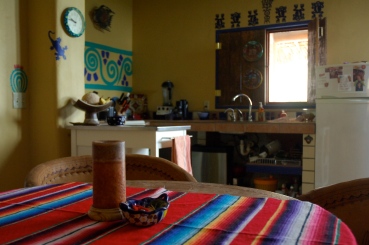 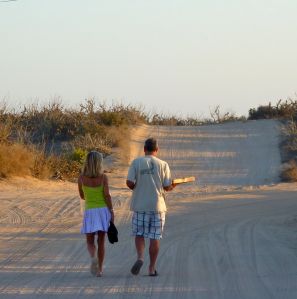 Catharine & Patrick walking home after (and with) pizza.

One of the treats in San Juanico is the Friday/Saturday night dinners at Dan Alacran Pizza.  The food is great, and the proprietors – Dan & Jackie – make the place almost feel like home.  In such a small community, it kind of is like eating with your family & friends.  And the possibility is great, that if you didn’t know someone when you came in, you will know them when you leave.  Such was the case a year ago when I met/got to know Cynthia Wagstaff, who is now one of my best friends.

Cathy, Pat & I were definitely ready for a shift from fish tacos.  After a fun day of surf and hanging out at the beach, a pizza and cold beer were on the agenda.  We watched surf videos – a staple of the pizza house –  always hopeful to catch a shot of ourselves (ha ha) in amongst the hot doggers with fabulous rides from second point all the way to first.  Perfect SJ friendships.

After dinner, we walked the short dusty street back to Cynthia’s house for ‘movie date.’   Another great end to a great day! 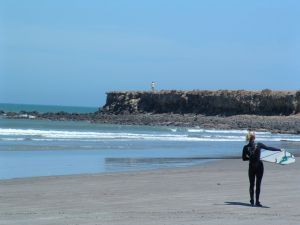 Baja dreaming gets easier/sweeter when I’ve another trip that’s within striking distance .. This one, just ten days out, and I will head south.  I’ve got a short stop in Loreto to pick up extra boards and supplies .. and then head to San Juanico for a few days of sun and play.

With luck, we’ll get a bit of a bump from a New Zealand ‘disturbance’ due to coincide with our arrival.

Dropping down the face of a perfect wave

Swells hit the points in the sleepy Mexican village – at least that’s what my girlfriend, Cynthia emails to me.  My  mind drifts to turquoise waters and waves that wrap around the points across the open bays.  Some of my most fun surfing – ever- happens here.  For the most part, everyone in the water is friendly, no one is too agro about sharing waves, and the energies of the sea, the sky and the desert all come together to make surfing bliss.

When I’m stuck in the states, my heart wanders… to the waves, the friends that are shared.

Last trip I met the “La Ventana” Group .. Irene & Ron, Norm, Kento & Jeff .. all who camped above second point and spent their hours on the water on their SUPs – Stand Up Paddle Boards.  The boards are a new addition to the SJ waters – and not loved by all.  What they can do is surf during the tides that are not conducive to normal surf.  Waves that are too slow .. or don’t ever really get around to breaking.

As with all journeys, there were high points and low points.  Good times at John Fields house ..of Juan & Juan .. I’ve never met the other Juan, but John and his wife, Carol are the sweetest folks.  He started with a garage, expanded it to several, and it makes up his ‘play box’. With a prime location overlooking the surf, parties at John’s house are always fun.  He cooks a mean hamburger – but watch out for his margaritas – or so I’ve been told.

Donn Stein – who had first loaned me a surfboard a year ago and sent me down my re-surfing passage – was already in town with his girlfriend and her daughter when I arrived.  Ran into them at Pizza Friday – and then again in the water.  Donn always wears a big smile.

Spent some time in the water with Dennis Choate.  Fun to surf with him both north and south of the border.  Still waiting for that promised surfboard 🙂

The waves came up .. the waves went down.  George Granger had been in town with his to-be-inlaws – his daughter is marrying a sweetheart, and when the party-goers left, George stayed to surf for a few days.  I gave him a ride back to Loreto and the airport.  It was a nice chance to get to know him better.  He spent a lot of time in Laguna when he was growing up – and we were able to share stories about old times, old houses, and old surf 🙂

Now .. three weeks later, I’m jonesing for some SJ surf.  Coming up!  I’ve got a trip planned for the end of the month  … Going to celebrate my birthday -and with good luck, the wave gods will be with us, and all the folks who said they’d show up will actually make it down and over. 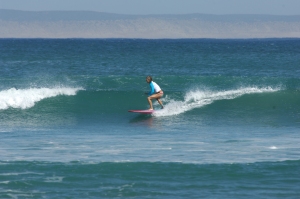 There is one truth that I discovered in the past year : I am healthiest when I spend time in the water.  Surfing has quickly become the water connection of choice.  I think it’s because of the intimacy, the complete identification of self with water that happens with a swell under my feet.

The waves are my Zen – my soul space – my sanity.

I know that I’m not the first to have this experience, nor will I be the last.  Thousands of surfers would attest to the sense of timelessness that happens when they paddle into a wave, feel the power generated by winds sometimes thousands of miles away, move and change their lives.

I had surfed when I was a teenager, and then some time spent in Hawaii.  But when I returned to the states, I ran into some really agro male surfers who pushed me off waves, cut me off – basically tried to convince me that they owned the water.  And I guess they won.  I went to college, worked three jobs, and then an inland marriage carried me within visual sight of the water, but a long drive through crowded freeways.

Someday with luck this will be me ... such beauty!

It took a major upheaval in my life – to not coax me – but throw me back into the water to find myself, my voice, and my sanity.  Now, there’s not much to keep me out of it.  I’ve broken my nose on my own surfboard – and found my way back into the water six days later.  I’ve got fin cuts, bruises, and rock slices on my feet.  Doesn’t matter. Doesn’t stop me.

A friend, Mikey, said, we get hurt, but we go back.  It’s true.  It’s what do, because there is magic in the waves …  Magic worth the paddle effort, the injuries, long drives or plane flights …

Now, when I run into agro guys, I first try to befriend them – if that doesn’t work, ignore them – and at last jump, just surf alongside of them. 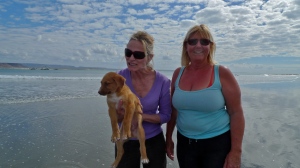 “Gus” was inadvertently tossed from the back of a pickup truck and simultaneously freed from the oil drum he’d been jammed inside – a trip to the dump and the end of a dog.  Rolling past Bill, Marci’s husband, was all it took for Gus to find a new home.  They had lost their dog a couple of years back, and Gus – like most dogs – found them.  Luckily, Gus’s sister, who showed up on my walk with Buster the next day and followed us back to Cynthia’s house, found her own home.  The luck of the dog, I guess.