One of the aspects of highway travel in Baja is the constant flow of road work.  It seems that just as soon as the crews finish one section of Highway One, they tear up another.  Often, what they tear up seems as good as what they replace it with – other times, the unbearable potholes and melted asphalt are graciously replaced with new graded road beds and fresh topping.

In the states, to complete road projects it seems always necessary to close routes entirely, or funnel traffic into diversions.  Baja road crews just chew up the old stuff, bulldoze it over, and shift travel to a dirt bed while they work on repaving sections.  The results can be miles and miles of dirt roads where just a week or so before there had been pavement.  Ie, make sure you have a spare tire and are adept at changing a flat! 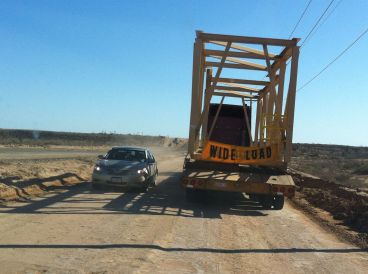 Miles of Dirt – Mex One 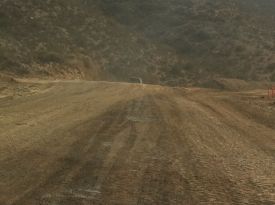 On Mex One, this in not an option (or any of the ‘major’ Baja highways).  For most of the 1500 miles of roadway, there is just the snaking two-lane road that heads from Tijuana in the north to San Jose del Cabo in the south.

If necessary, a dirt road is bulldozed parallel to the road being repaired.  This is often boulder filled, or worst, soft sand which leaves drivers wishing for 4-wheel drive and praying that they don’t need it.

Roads don’t close in Baja due to floods or rockfalls.  Maybe temporarily, but the creative population always manages a work-around.  Three years ago when torrential rains wiped out 6 major bridges overnight the traffic was stopped for 24 hours.  But after, ingenious bulldozers began to drag heavy tractor trailers and anyone else brave enough to cross rushing flood waters from what was left of pavement on either side of the arroyo.

Rock fall?  Give locals an hour and they will have either pushed the offending boulder out of the way, or cleared enough of the associated debris to allow passage.