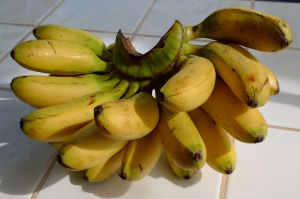 Shopping at Yargoza, a small local market with fabulous produce, I picked up a bunch of  the smallest bananas I’d ever seen.

“Domingo,” she responded, and pointed to a tag where the name was listed.

I love trying new things, so .. bananas went into the basket, along with a kiwi, an asian pear and some yogurt .. to be savored for a late lunch.

The bananas are about three inches long, and very sweet. Their skin is extremely thin, but oddly tougher than that of a more common “Chiquita” banana. The flavor is rich; the texture creamy.

My wandering mind wanted to now know more , and a rather circular google search landed me on a bit of banana history, which of course, is fascinating to my hungry mind :

There is a wide variety of historic references to bananas. They are mentioned in ancient Hindu, Chinese, Greek and Roman texts. It is believed that the earliest written reference to banana is in Sankrist and dates back to around 500 BC. Bananas are suspected to be the first fruit in the earth by some horticulturists.

The origin of bananas is placed in Southeast Asia, in the jungles of Malaysia, Indonesia or Philippines, where so many varieties of wild bananas still grow at present. Bananas have later travelled with human population. The first Europeans to know about bananas were the armies of Alexander the Great, while they were campaigning in India in 327 BC. In the Middle Ages, the banana was thought to be the forbidden fruit of paradise by both Moslems and Christians. The Arabs brought them to Africa. Africans are credited to have given the present name, since the word banana would be derived from the Arab finger. The Portuguese brought them to the Canary Islands. Bananas changed during all these trips, gradually losing its seeds, filling out with flesh and diversifying.

When Spaniards and Portuguese explorers went to the New World, the banana travelled with them. In 1516, when Fiar Tomas de Berlanga sailed to Santo Domingo, he brought banana roots with him. From there, bananas spread to the Caribbean and Latin American countries.

Bananas started to be traded internationally by the end of XIX century. Before that date, Europeans and North Americans could not enjoy them because of the lack of appropriate transport for bananas. The development of railroads and technological advances in regrigerated maritime tranport allowed for bananas to become the most important world traded fruit.